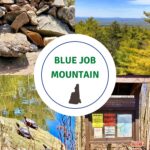 This article was written during the COVID-19 pandemic, a time when schools and businesses were closed and people remained in their homes for weeks, sometimes months on end trying to prevent the spread of disease.

Believe me, it's enough to make you go stir-crazy. That's when I decided to grab my husband and head out for a hike. Destination? Blue Job Mountain!

Blue Job (pronounced jobe) Mountain is located in Farmington, New Hampshire, however the parking lot and main entrance to the trails can be found on First Crown Point Road in Strafford.

The trail is a 3.3 mile loop which is considered an "easy" hike, however let me tell you that the 0.5 mile hike up to the tower is pretty steep and for me was quite the work-out. 🙂

Not to worry, there are plenty of stops along the way to rest.

Once you reach to top, you can climb the fire tower and check out the panoramic view of New Hampshire and even see the White Mountains in the distance.

After seeing the fire tower, we continued on the trail and headed towards Little Blue Job Mountain. Along the way we crossed a a small stream and saw several salamanders swimming by, and then came across a pond and witnessed several painted turtles soaking up the sun.

These cairns (rock formations) were plentiful on the trail as well, and were pretty cool. According to the Blue Job Mountain Easement Facebook Page, people are discouraged from making them. Apparently some were formed off trail which led hikers off course and this resulted in some unnecessary rescue efforts. 😮 Stay on the trail, folks!

The view from Little Blue Job Mountain was also quite spectacular!

The hike back was quiet and serene. The trails are pretty spread out, and we were able to avoid contact with other people. I'd imagine it would be a bit more busy during the summer months.

Dogs are allowed on the trails, but must be on leash. They also have blueberry fields! Perhaps we may have to make a second trip back in July with the pups.

Until then, good-bye my mind-freeing, soul-cleansing forest...

Have you hiked Blue Job? Did you enjoy this post? Leave me a comment below! I'd love to hear from you.

If you are planning a visit to New Hampshire, you may also enjoy a cruise on the Mount Washington. Check it out!

Definitely go back in July if possible the blueberry picking is great,

That is good to know, Kim. I look forward to it!! 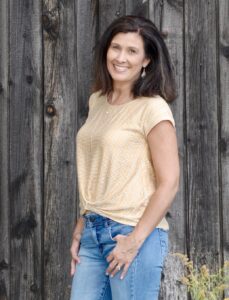 Hi there! I’m Christie. I am a Registered Dietitian and have loved food and cooking, since, well, …forever! I have a passion for healthy eating and can often be found in the kitchen creating nutritious and delicious recipes. Read more...